Love. Whether it's religious or secularist, capitalist or communist, optimist or nihilist, it's the time of year where everyone needs to "chill" and appreciate those we love and those who love us.

The Holiday Season has Begun

If Halloween is any indication, this is going to be a terrific holiday season. The Hipwaders took to the pavement and pumpkin patch to bring audiences our Halloween tunes and - little did the kids & families know - the songs from our next album. Yep, the songs are written and we performed the next album in it's entirety several times over the month. We go into the studio in January and for the first time actually have the songs arranged and even the running order figured out. Now, of course, things could always change (say, if a killer new song is brought to us by the muses...) but for now we're

In the meantime, we're happy to note that our holiday album, "A Kindie Christmas" just won a NAPPA Honors Award. The best part of the award was the review that accompanied it:

I’ve always said that Christmas albums should rock out. There are plenty of traditional albums out there filled with sleigh bells and “Drummer Boy,” but there are none that we know of that feature a song called “Santasploitation,” where Mr. Claus himself is the rock star! The funked-up “It’s Wintertime” truly captures the hip-kid feeling of Christmas. From there, we taste a bit o’ country in “Santa’s Train” and the fun doesn’t stop there. The album gets progressively more and more rockin’, with some nice poignancy coming through in “Tinsel and Lights” that better describes the Christmas scene than traditional songs do. Complete with full rock band, distorted guitars and even a little country twang here and there, this album is the Little Miss Sunshine of kids’ CDs. (Don’t worry. There’re a few sleigh bells on this album, too!)

"Little Miss Sunshine teaches us to embrace that middle ground, acknowledging that life may just be a beauty pageant, where we're often going to be outdone by someone prettier, smarter, or just plain luckier, but if we get up on that stage and be ourselves, everything will turn out fine."

We couldn't agree more.
Posted by Tito at 1:00 AM No comments:

Kindie Christmas: Mommy the Superhero (free download)
Posted by Tito at 9:15 AM No comments: 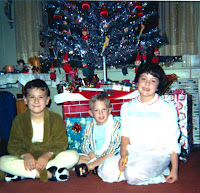 Well, after more than a year of blogging at this site, Christmas 2009 has finally arrived. Keeping up with all things Christmas has been a truly daunting but enjoyable task and I've learned quite a bit. One of the things I've learned is just how ridiculous the "War on Christmas" is. Don't get your religion mixed up with the ancient celebration of the winter soltice and nobody gets hurt. Since the dawn of man, people have prayed for the return of warm weather for the return of crops and better hunting. It's been co-opted a million times over to suit whatever religion/philosphy/scam wishes to make it their own and it will continue to be co-opted. I say stick to your belief and I'll stick to mine. 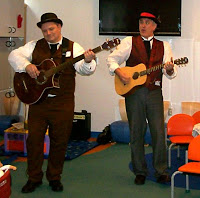 I'm throwing my hat in with Santa Claus. Nobody ever went to war in his name and he's got a positive message - "Be good for goodness sake".

The message of the Kindie Christmas has always been about love. I really think Christmas (and I can't think of anything better to call it) should just be about paying attention to those in your life who look out for you, encourage you and love you. And, yo 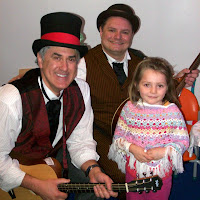 I was fortunate enough to celebrate Christmas early when Hipwader DJ and I performed for the UCSF Children's Hospital and California Pacific Medical Center's Pediatric Ward. Expecting sad, miserable kids we found instead happy, joyous children challenged by adversity but not showing any 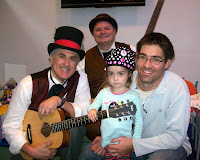 signs of letting their medical ailments get their spirits down. Hearing the children laugh and seeing their beaming smiles during our performances gave us more joy than we would have ever expected. Like the Grinch, I think my heart 3 sizes that day.

I'm going to try and carry that feeling for the rest of my life. 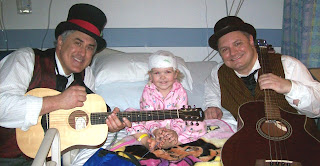 Now, on a less serious note...here's a cartoon!

Love and Merry Christmas, Tito
Posted by Tito at 3:00 AM 3 comments:

Everybody Say, "Let it snow!" 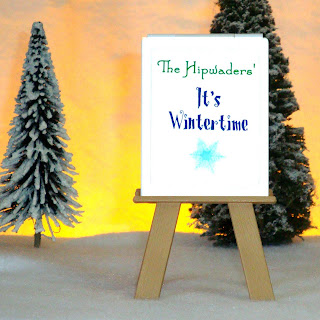 So, I woke this morning to a couple of surprises. First, Kalani Hubbard had uploaded the video for "It's Wintertime" which we had collaborated on. I spent hours (really) viewing public domain VHS cassettes full of old Christmas cartoons. I never realized how many of them existed. Unfortunately, most of them were pretty bad. Fortunately, I located some scenes that fit the lyrics perfectly.
Kalani then came over to our "studio" (garage) and videotaped our bobbleheads on our winter-decorated stage - an Angelina Ballerina doll stage purchased on eBay!). Add some cool Noggin Bop wind-ups and a robot Santa and you got some wintertime fun.

The second surprise was it has snowed in the Bay Area! First time in over a decade it's actually snowed enough to stick on the ground and there's actually a few inches in some places.

It's beginning to look a lot like Christmas, indeed!

Monday, December 7, 2009
CD Review: "A Kindie Chrismas" by The Hipwaders
The following is a review of a promotional copy generously provided by the band...


I went into my first listen of this CD without knowing that The Hipwaders are an award winning kid's music act and for once my ignorance paid off allowing me to listen without preconceptions. Well, I did actually have some preconceptions, based on my misreading the album title (as "A Kindle Christmas") and it's whimsical graphics I was expecting a collection of novelty tunes with names like "The 12 Days of Facebook" or "Twas the Txt b4 Xmas". Imagine my (very pleasant) surprise to find, instead, a charming sleighful of lightly rockin' rootsy Christmas tracks that the whole family can enjoy throughout the holiday season. Then I re-read the tite - Kindie = Kid's Indie. Doh!

As I mentioned The Hipwaders are a kid's act but there's nothing juvenile about their work. This is the new wave of kid's tunes with integrity and street cred popularized by the likes of They Might Be Giants, Barenaked Ladies, Dan Zanes, Peter Himmelman and Los Lobos. In fact my wife at first thought I was listening to REM. The songs are simple, catchy and a welcome addition to any family's holiday music collection.

"A Kindie Christmas" is a fun, everyone in the family friendly disc that is well worth listen. Preview and/or buy it at lala, order A Kindie Christmas at Amazon or visit The Hipwaders Website.
Posted by Tito at 7:42 AM No comments:

A Mel Brooks Version of The Beach Boys

Getting a mentioned in a poem has never been a band goal but now that this has happened I must say it's kind of cool. Poetry Midwest, an internet literary magazine, published the following poem by writer/poet/food & wine critic, etc... Jen Karetnick. In this poem, Mrs. Karetnick dons her travel writer/food critic/poet (paper hat) to document her experience at the Jelly Belly Candy Factory where The Hipwaders last performed over 3 years ago. I love her description of us as, "A Mel Brooks version of The Beach Boys". 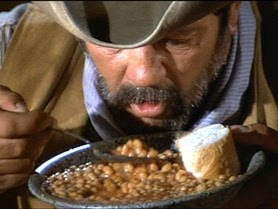 However, I must point out that the band has never, nor will ever, perform songs from "The Lion King". This sort of treacle can join the list of songs by other composers for whom The Hipwaders will never perform such as Diane Warren and Andrew Lloyd Webber. We would rather eat a dozen boxes of Jelly Belly's Harry Potter Bertie Botts. With that said, after the poem enjoy our specially-made version of "Jellybeans" for the Jelly Belly company that has never been published. We were hoping the company could use the song in some way for promotion. Sadly, the never did.

The morning after the death

of the Pope, at the Jelly Belly factory

where his portrait hangs, fixed in candy

with his licorice and cappuccino sideburns

pleasant but long since flat, a band

called “The Hipwaders” belted out the theme

carpeted with ketchup, in the hyper-cheerful

instead of directions I’d thought they were

of Todd Oldham and Old Navy—but found instead

a Mel Brooks version of the Beach Boys,

I couldn’t blame them; I was there, too,

that had seen days more crisp

on my leaking patience, answering

over and over why no Jelly Belly beans

all production had ceased, though not

because of the Pope; inventory was being taken,

particularly of the newest flavor, mango,

with its orange-pink skin flecked with green,

to peep like the eyes of frogs from beneath

the buds in our trees at home,

I can never get to grow. John Paul II

beyond rigor mortis for whatever resurrection

might come his way. I hope he wasn’t disappointed.

The jelly beans, as it turns out, go through

drinking in the sanction of choice. In the end,

those that didn’t quite get what kidney

shapes are all about, and don’t quite care

about livers, either. Like me, and the two kids

and eat. It’s okay to gorge yourself

in the name of terminal harmony

Made back in 2001 to entertain my boys, this video features my HO scale train layout with some additional classic Christmas characters doing their thing. The most awesome Kalani Hubbard edited my crummy raw footage replacing my original demo to fit the new Hipwaders' recording.
My youngest slowly destroyed the layout during his toddler years and sadly, the layout was retired...

It's the day that's been over 20 years in the making. Really. A couple of tracks from "A Kindie Christmas" date from the late '80's and like a good fruitcake have been properly aged to perfection.

OK, I can't believe I just wrote that either.

Despite bad analogies we think you may like our new album.

"The album is a genuine gem of Christmas tunes - all original, some more Christmas than others, fantstic sounds throughout. It was worth the 20 years wait. Well done, 'Waders, one and all!" - A Christmas Yuleblog

"'Wake Up'... may just be the best 2 minutes of rock-n-roll Christmas tunage ever" - Jeff @ OutWiththeKids blog

"The American Heritage Dictionary of the English Language defines childlike as “Like or befitting a child, as in innocence, trustfulness, or candor.” I love this CD, so if that makes me childlike, then hand me another cookie, fill my milk glass and let me enjoy the tinsel & lights!" - Bongobells

"In something of a stylistic tour de force, The Hipwaders deliver a brilliant, if somewhat brief, set of original rock songs to celebrate the season. Candy! A Kindie Christmas is clever fun!" - Christmasreviews.com

Really there's no real way of convincing you unless you check out the music, right? So, why don't you check out "Wake Up" animated by Santa's little helpers over at Planet Sunday...

Here's a preview of our coming attraction:

Want to hear more? Check out the samples over here:

or purchase through Amazon.com

We'll be back with more videos throughout the holiday season, so stay tuned and visit our YouTube channel for all of our videos!
Posted by Tito at 12:01 AM No comments: